Shortly after his return from the Discovery Expedition, the Wilsons settled in Bushey. For a couple of years this proved to be an ideal base, not only due to its proximity to London and the countryside but because Bushey is a centre for artists. At this point in time this was largely due to the residence of Hubert von Herkomer, who had opened the Herkomer Art School in Bushey in 1883 and cocked a snoop at traditional methods of art teaching. His progressive methods produced a number of successful artists and attracted students from all over the world. From 1905 the Life School was run by one of Herkomer’s most successful pupils, Lucy Kemp Welch, a noted painter of horses. The Wilsons dined with Herkomer and got on well with him. Wilson subsequently attended the Life School and executed some striking studies of horses. However, it is unclear in what capacity he was there, or for how long. It must be presumed that he exchanged ideas on the execution of such drawings with Lucy Kemp Welch and other artists and that he further developed his own technique through any criticism received but it seems doubtful that he was a pupil as such. If Wilson had intended to go to Art School at Bushey and fulfil his lifetime’s dream of art lessons then it seems odd that this isn’t recorded. In any case the dream was not fulfilled to any extent; his work simply took over his life. Nevertheless, the experience must have been helpful to him in his continuing self-development as an artist and in the subsequent execution of his mammal pictures. A member of the school, Alfred Soord, subsequently painted Wilson’s portrait and they struck up an agreeable friendship. The portrait was exhibited in the Royal Academy Exhibition of 1910.

After his discussions with Barrett-Hamilton in Waterford, Wilson headed back to Bushey and set to work on the illustrations for the British mammal book throughout the autumn of 1905. He paid a three day visit to Mr. Cocks at Henley where he produced over 70 sketches of the Pine Martens, Wild Cats, Badgers and Otters, which were kept there. Wilson was determined that, wherever possible, every plate should be produced from his personal observation of the live animal. His preparatory sketching was often carried out in the field but he also sketched specimens that were easily accessible in private collections or at the London Zoo. This was particularly welcome for species that he was unlikely to encounter in the field. He could also be found studying British mammal skins in the Natural History Museum or at home, for it wasn’t merely specimens of dead grouse that arrived in the post. When news of his mammal work with Barrett Hamilton spread, amateur enthusiasts sent him their dead mammal specimens for painting and study. However, Wilson continued in his search for live specimens. He visited the estate at Woburn and was delighted to study so many species in semi-wild surroundings. In February 1906, he returned to his friend Mr. Cocks and with Mr. Heatley Noble went bat hunting. They entered an old tunnel excavated through a chalk hill and here they found bats of four species, Daubenton’s, Natterer’s, Whiskered and Long-eared. Wilson collected 20 bats and brought them back to Bushey. He was quietly working on one of these live specimens in his studio when a flea crawled out of the bat fur and onto the tip of his pencil. It says much of the breadth of Wilson’s knowledge of Natural History that he instantly recognised it as a rare species that would be appreciated for the collection of Mr. Charles Rothschild. He called out to Oriana for assistance and she had to abandon her soufflé in the kitchen in order to fetch a tube of spirit into which the flea could be placed. This incident was later portrayed in the 1949 film, Scott of the Antarctic.

Once the Wilsons moved up to Scotland to work on the Grouse Inquiry, he found new opportunities for executing field studies of mammals, particularly at Glendoe and Cortachy. He hunted bats in the Monastery of St. Benedict and during early morning strolls across the moors would often stop to sketch the mammals that he encountered. Nevertheless, it wasn’t always possible for Wilson to study a species in the field nor to find good dead specimens on which to base his pictures. This was particularly difficult for British whale species. Wilson did study whales in British waters for the mammal book, having the opportunity to do so from the boat crossing during a visit to the grouse moors of Shetland in 1906. However he was not able to study all of the cetacean species that he needed to illustrate, and utilised a combination of photographs in books, or the field sketches that he had made of cetacea whilst aboard Discovery. These sketches were exactly what he wanted, being studies of the live animal, but led to a rather amusing error in the plate of the Killer Whale, for here he has clearly painted an Antarctic Killer Whale rather than a British Killer Whale. They are the same species, of course, and Wilson presumed that they must look the same but there is clear visual difference of which he was obviously unaware. In the Antarctic the back patch of the Killer Whale is a deep yellow, due to the diatoms that grow upon them in those waters, whilst it is a more normal white in the British Killer Whale. A quick look at the preparatory sketches upon which the plate is based confirms the source of the mistake. It is an error by which he would have been heartily amused, had anyone realised. Wilson did realise, however, that the cetacea were the weakest point of his mammal work. In 1910, shortly before sailing South aboard Terra Nova, he visited the Shetlands once again. This visit was specifically to spend two weeks whaling in and around the Shetland Islands aboard a Norwegian whaling vessel. The visit had a dual purpose: both to prepare himself for whale work in the Antarctic and to improve his whale material for the mammal book. Whilst he left Barrett Hamilton with finished plates when he sailed South, he hoped to have a chance to re-work the cetacea images upon his return from the Antarctic, since this volume was due to be the last published.

Both Wilson and Barrett Hamilton set themselves high standards for the mammal book. In this regard, as in many others, their lives paralleled one another. They both attended the same lectures at Cambridge, used the same laboratories and finished equal in the Tripos. They were both candidates for the scientific staff aboard Discovery but Wilson won out on that occasion. However, Barrett Hamilton wrote the chapter on the seals for the Antarctic Manual, and so essentially wrote Wilson his instructions for the seal work aboard Discovery. After the Bruton Gallery exhibition, Barrett Hamilton was most keen to secure Wilson’s services for the illustration of his book and it is as well that they already had such a good working relationship, for Barrett Hamilton was a ruthless critic of Wilson’s work, something that Wilson was very grateful for. As Barrett Hamilton recalled: “… it was sometimes necessary to call him to earth for a demonstration on murine osteology but no man ever took criticism in better part. As a rule he forestalled it by a genial counter attack:- ‘You are so polite this morning that I know you are going to tear my drawings to pieces’ was his typical opening… ”

Barrett Hamilton drew the best out of Wilson and thought him a genius. Others were equally impressed by his mammal paintings. The publishers Oliver and Boyd showed a sketch of a Stoat to Eagle Clarke and Grimshaw and were told that Millais couldn’t do anything as good. Wilson was astonished: “… this is of course humbug but they took it in and congratulated me most heartily, so I have something to live up to now.” Others were particularly impressed by the work that he produced in a blue and grey wash for the black and white illustrations in the mammal book. The plates were designed to meet the publication requirements of the day; indeed, Wilson often produced several versions of the same plate for the client to choose from in order to satisfy their requirements. Yet, widely acclaimed as they were, his illustrations were ahead of the technical possibilities of his time. Barrett Hamilton was to regret that publication had diminished the colours of his images. In comparison, Wilson’s original preparatory work is as fresh and alive as if it had been drawn yesterday. Had he been able to advance beyond both the technical and the aesthetic restrictions with which he had to work, he might have left a somewhat different illustrative legacy. 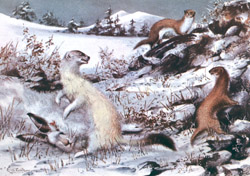 Nevertheless, published in parts from 1910-1921, A History of British Mammals by Barrett Hamilton and illustrated by Edward Wilson became a classic work on the British mammals. It is still sought after and was republished as recently as 1978. This is perhaps especially surprising since it was never completed and so many of Wilson’s plates were never used. In particular Volume III on the marine mammals was never produced. The first part was issued in October 1910, shortly after Wilson had sailed South aboard Terra Nova but he never saw the finished work. Nor was he to have the opportunity to re-paint the cetacea. Having sent a batch of illustrations back from South Africa, he didn’t return from the frozen South. Shortly afterwards, Barrett Hamilton also died in the Antarctic: he had a heart attack in January 1914 upon the island of South Georgia. He was studying the whales.