Amid a cacophony of hooters and cheering crowds, Terra Nova sailed from Cardiff on 15 June 1910, bound for the frozen South. They sailed via Madeira, South Trinidad, South Africa and Australia to New Zealand, with Wilson sketching all the way. At South Trinidad, he was able to see, once again, the Trinidad Petrel that had been named for him by the ornithological authorities. From South Africa he posted home the last of his mammal and grouse work. Here, too, Captain Scott joined the ship. He had stayed behind to raise badly needed funds for the Expedition and now sent Wilson on ahead to Australia to carry out fund-raising there. Fund-raising was an almost constant headache. The entire Expedition finally assembled in New Zealand from where it sailed on 29 November 1910. Despite having received a telegram from the Norwegian explorer, Roald Amundsen, informing Scott that he was “sailing South” there was still no real comprehension aboard as to what this truly meant. In fact, Amundsen had deceived everyone as to his true intentions and was deliberately setting out to forestall the British at the South Pole.

After fierce storms and a severe delay in the pack ice, the Expedition finally landed at Cape Evans in McMurdo Sound and had soon established their base. By 24 January the first major sledging party was heading South to establish supply depots towards the following season’s attempt on the Pole itself. This Depot Journey was a catalogue of bad luck and human error which left the Expedition’s main supply depot 30 miles further north than had been intended and with the loss of six ponies. The dogs had not performed well either. Into the middle of these concerns arrived the news that Amundsen had been found, having set up his winter quarters on the Great Ice Barrier at the Bay of Whales. This was a tremendous shock and after numerous arguments and much fretting, Scott decided to simply stick to his plans as they were laid out, rather than engaging in the race for the Pole that Amundsen had apparently declared.

Through all of these events, Wilson was a bastion of calm support to Scott. Indeed, he became the confidante of almost all on the Expedition, who regarded him with considerable affection, calling him “Uncle Bill”. They trusted his common-sense judgement, his personal serenity and his complete dedication to others. What they didn’t know was the considerable personal effort that Wilson had made, over the years, to achieve this mastery over his acid tongue and highly strung emotions, nor that the basis of this achievement lay in a strong Christian faith. 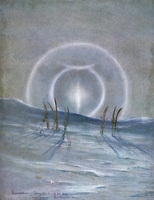 He quietly organised and inspired the scientific staff to carry out an extraordinary amount of work as well as executing a great deal himself. He was for ever working at his table studying biological specimens or painting up his sketches, frequently standing so as not to fall asleep. In particular, during the first months of the winter Wilson executed some of his finest watercolours. It is this series of his paintings that are perhaps most widely known. The accuracy of his Antarctic work in terms of colour and detail has frequently been noted, in particular by Apsley Cherry Garrard. He later wrote of these paintings that “If you look at a picture of a parhelion by Wilson not only can you be sure that the mock suns, circles and shafts appeared in the sky as they are shown on paper, but you can also rest assured that the number of degrees between, say, the sun and the outer ring of light were in fact such as he has represented them.” It was this level of scientific accuracy, also developed with painstaking self-discipline over many years, that made Wilson an important expedition artist. He was also amongst the last. On Scott’s Expedition too, was the first professional photographer to head South. The work of the “camera artist”, Herbert Ponting is remarkable. Film and photograph, rather than art were, from this point on, the primary media for recording expeditions. This expedition is the final turning point, having with it the last great expedition artist and one of the first great travel photographers, working side by side. Wilson and Ponting got on famously and assisted each other with criticism and inspiration. They planned to exhibit their work together upon returning home and it seems astonishing that this was never achieved.

Apart from his painting, Wilson had something rather unusual planned for the winter scientific programme. The fact that they had been unable to make their base at Cape Crozier meant that a winter journey would need to be undertaken in order to secure the eggs of the Emperor Penguin at an early stage of embryonic development. It was thought that the study of the embryo would yield the scientific holy grail of the missing evolutionary link between dinosaurs and birds. The prize could not have been higher even though it meant making a journey of considerable difficulty. 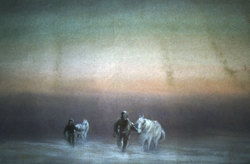 This was one of the most astonishing journeys to be successfully executed throughout the Heroic Age of Antarctic exploration and was immortalised in Cherry Garrard’s subsequent book, The Worst Journey in the World.

The main Polar Party left Cape Evans on 1 November 1911. Following his experience on the Discovery Expedition, Scott’s assault on the Pole utilised several modes of transport, tractors, dogs and ponies, with mixed degrees of success. From the bottom of the Beardmore Glacier the sledges were man-hauled, as planned. At the top of the Beardmore Glacier Scott announced the final team for the Pole, with 5 men rather than 4, amongst which Wilson was delighted to be included. The team of Scott, Wilson, Bowers, Oates and P.O. Evans achieved the South Pole on 17 January 1912. Here they found Norwegian flags and a tent; Amundsen had beaten them to it. It is doubtful if Wilson was very bothered. He dutifully sat and sketched; they took their positions, posed for photographs and headed north again a couple of days later. It was on the way back down the Beardmore Glacier that things started to go badly wrong. Evans was becoming noticeably weak. They stopped to collect geological samples in the area around Mount Buckley, as they had been requested to do by senior geologists, and picked up 35lbs (16kgs) of specimens. Amongst these was the first known Antarctic specimen of Glossopteris, a critical specimen in the debate on the origin of the Earth’s continents. Wilson also made detailed geological notes and sketches as they descended the Beardmore. They were to be his last. 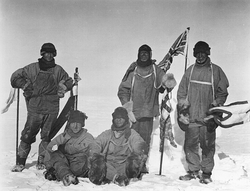 His time was increasingly taken up nursing his sick companions with an extraordinary selflessness. Evans died at the bottom of the Beardmore Glacier; Wilson thought that he had injured his brain in a series of falls. The remaining four men soldiered on but once on the Ice Barrier experienced unseasonably low temperatures. Instead of the expected temperatures around -20°F (-29°C) they experienced temperatures down to -40°F (-40°C). These altered the surface of the snow and made it almost impossible to pull their sledge. One by one they became frost-bitten, Oates so badly that he committed suicide in a bid to save his companions, walking out of the tent with the words “I am just going outside and may be some time”. It was not enough. Badly frost-bitten, dehydrated and short of food and fuel, Wilson, Bowers and Scott perished in their tent around 29 March, 11 miles (20km) short of their main One Ton Depot. The following Spring they were buried upon the Great Ice Barrier by a search party, which also recovered their scientific specimens, their diaries and the final sketch books of Edward Adrian Wilson.