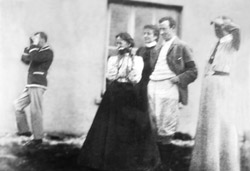 The return of the British National Antarctic Expedition to the United Kingdom was greeted with wide acclaim and an almost endless series of dinners. Despite the social whirl, Wilson was soon hard at work preparing for the public exhibition of the Expedition’s achievements. This opened at the Bruton Street Gallery in London on 7 November 1904 and was so popular that it subsequently toured many provincial towns. One of the key attractions was Wilson’s paintings. For the first time in his life Wilson found fame, which he disliked and shrank from at every opportunity. Nor did he enjoy the commercialisation of his work. He had innocently agreed to produce copies of his paintings for a modest price out of deference to the Royal Geographical Society which had put up the Expedition. However, he was subsequently persuaded by the director of the Bruton Gallery to allow them to sell these copies for a considerably greater price, from which the gallery took a handsome commission, of course. Over 80 orders were placed which Wilson diligently executed at his home in Bushey over the next six months but he received a good deal of trouble and little of the 20-30 guinea picture price (approx. £1500-£2000 today) for his efforts. He was, in essence, thoroughly fleeced and with no room for legal redress. 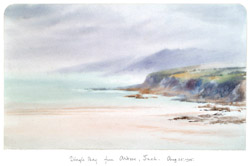 Nevertheless, the exhibition brought Wilson to the attention of numerous individuals. Many visitors to the exhibition were impressed by his landscape and topographical work. What was truly surprising to the visiting crowds, however, was the “aliveness” of his studies of the birds and animals. This was, at the time, unusual. Sir Joseph Hooker, who had sailed with Ross in a similar position to that of Wilson with Scott, made his admiration for Wilson’s work in this regard widely known. They later met and Wilson studied Hooker’s Antarctic portfolio. Wilson was also pleased to meet the artists Herkomer and Swan, and to renew his acquaintance with the Duchess of Bedford, whom he had known as a girl. She now took him under her wing and gave him the run of the Woburn estate. Other significant meetings included one with the Murray brothers, who would, years later, publish Wilson’s biography. They encouraged him to write and illustrate for a living. Hallam Murray, who also painted, offered Wilson a critique of his work, “correcting several faults which run through all of my painting”. He was delighted. This was exactly the sort of artistic exchange that Wilson sought as some compensation for his lack of art lessons. These he still craved but, if anything, had even less time for now than ever before. It also encouraged him in his aspiration to write and illustrate wildlife books. He was particularly keen on producing something “inspired by” the work of Long and of Ernest Thompson Seton, whose illustrated tales of animals had been such a success. 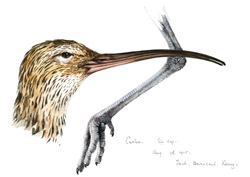 Wilson was additionally pursuing an idea at this time to return to New Zealand and become something along the lines of a “government scientist” as Thompson Seton was in Canada. The Wilsons had fallen in love with New Zealand during the Discovery‘s comings and goings there and longed to return. Wilson had been shocked by the rapid disappearance of the native New Zealand bush and its associated wildlife, particularly the birds, and he wanted the chance to go and live there in order to record and study the vanishing species before they disappeared. He wrote to numerous officials offering to work essentially for his keep in order to achieve this but did not receive an encouraging response. However, most of these ideas of Wilson’s slowly started to disappear as practical options. As his mountain of work grew around him, he had scant opportunity to write his animal tales or to return to New Zealand. Instead, Wilson undertook to write and illustrate the reports on birds and mammals for the Discovery Expedition Reports. This resulted in being employed for four days a week at the Natural History Museum, working with eminent zoologists on the Expedition collections. Wilson wanted his monograph on the Emperor Penguin to become a classic. He also undertook work for books connected with the Expedition, in particular Captain Scott’s own book The Voyage of the Discovery, a facsimile of The South Polar Times and the Expedition’s Album of Photographs and Sketches. It was 1908 before he had completed the numerous publication and illustrative projects that arose from the Expedition. These projects helped to keep him in regular contact with Captain Scott and introduced them both to Mr. and Mrs. Reginald Smith of the publishers, Smith, Elder and Co. They were to become close personal friends.

The Wilsons managed to escape his increasing work load to spend Christmas with the Wilson family in Cheltenham. Although his mother had by now given up the lease on The Crippetts, Wilson still liked to walk up to the farm and to visit its woods and hedgerows. It was a special pleasure that Wilson liked to indulge in and which became rarer as his success grew. Apart from anything else, Wilson was much in demand as a lecturer and delighted his audiences with tales and impressions of penguins. He also began to campaign for the protection of penguins, which were being boiled for their oil in increasing numbers. He gave papers on the subject before the RSPB and the International Ornithological Congress. It started a process which finally met with success many years after Wilson’s death.

It was after addressing the British Ornithologists Union at the Restaurant Friscati in March 1905 that Wilson was introduced to Lord Lovat. Ogilvie Grant had invited Lord Lovat to attend the meeting especially to meet Wilson. He was the Chairman of the Board of Agriculture’s Commission on the Investigation of Grouse Disease. The Board of Agriculture had commenced the Inquiry because grouse shooting was an important part of the rural economy and the birds were dying of a mysterious disease.

The cause had so far eluded researchers. Lord Lovat was looking for a new field naturalist who was also a bacteriologist and doctor to carry out the field-work for the Inquiry. This contract was expected to engage the person concerned for six months of the year. Ogilvie-Grant thought that Wilson was the perfect candidate. Upon meeting him, Lord Lovat was so impressed that he invited Wilson to Carlisle the following day to a meeting of gamekeepers who were to discuss the subject. Wilson agreed and after attending the Carlisle meeting accepted the post of Field Observer to the Commission.

Additional offers of work kept pouring in. Of particular excitement was contact from an old Cambridge friend, Gerald Barrett-Hamilton, who was a keen admirer of Wilson’s work. Barrett-Hamilton had been engaged to produce a new edition of Bell’s A History of British Mammals and he wanted Wilson to do the illustrations. Wilson jumped at the chance, the thought of illustrating many of the animals of the British countryside, which he knew so well, was hugely appealing. Shortly after he had agreed to this Wilson was contacted by the ornithologist Eagle Clarke who had been commissioned to produce a new edition of Yarrell’s A History of British Birds. He, too, wanted Wilson to provide the illustrations. Wilson was overjoyed; the chance to illustrate all 350 species of British birds was a project that was so close to his heart that he simply could not refuse. Since the grouse work was only scheduled to take up six months of his year, Wilson was confident that he could meet all of these other demands in the six months remaining to him.

Before these projects began in earnest, however, a plan had been hatched by Wilson’s parents for a full family holiday in the West of Ireland. The Wilson family had a tradition of such holidays, during which the time would be spent largely in picnicking, reading, sketching and natural history collecting. It was to be the last such family holiday, although this wasn’t realised at the time. Despite his parents instruction that it was to be a total holiday, such were the demands on Wilson that he nevertheless took unfinished work with him to complete. His parents had taken a house for the month of August, at the appropriately named Sketchers Cottage in a wild corner of Kerry overlooking Dingle Bay. 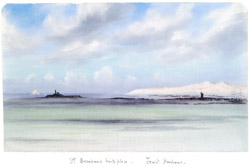 The remoteness of the area at this time meant that it was alive with wildlife, including many species that were already quite rare on the British mainland. The skies were still full of Choughs, Red Kites, Ravens and waders. The party were greatly excited to spot Grey Seals basking on the rocks not long after their arrival and Wilson spent many quiet hours enjoying, watching and sketching them playing in the surf. Many of the sketches that he made at this time were of immediate use as preparatory material for his illustrations of the British birds and mammals. He also produced a series of landscapes. George Seaver, who many years later was to be Wilson’s biographer, thought these to be amongst his finest works, exuding “the charm and glamour of the ‘Celtic twilight'”. Wilson was relaxed when he painted them, something that he rarely had time for with his painting again. He had gained a great deal of experience as an artist since the last time that he had painted for relaxation and he revelled in the freedom to indulge these skills whilst at ease on the beach. Most of their time was spent sketching, or reading, although Wilson and his wife did manage a visit to nearby Killarney. It was a wonderful, tranquil few weeks.

On the return journey to England, Wilson left the main family party in order to take the chance to visit Barrett-Hamilton, who lived in Waterford. They discussed illustrations for the forthcoming book and Wilson made use of the opportunity to visit and sketch some of the castles and abbeys of the Irish South-east. Once back in England, it was time to knuckle down and produce results for the numerous projects in which he was now engaged.