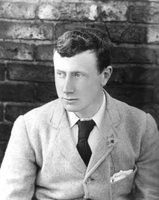 Wilson was rapidly at work with the second part of his M.B. degree. This involved long hours of hard work at St. George’s Hospital and he was soon immersed in anatomy, physiology and surgery. Nevertheless, he found time to play football for the hospital and also to row. He took lodgings in Paddington and walked to and from St. George’s which was at Hyde Park Corner, often taking detours through the London parks to hunt for “weeds and mushrooms” to draw and paint. Uncle Charlie rapidly introduced him to the appropriate people at the Zoo, so he soon had special permission to sketch in its grounds, where he spent all the time he could spare studying the birds and animals. Wilson was becoming more confident in his abilities and potential as an artist, in large part due to his frequent visits to the art galleries around London. He was not always impressed with what was on show and was becoming increasingly convinced that he could do as well as, if not better than, some of the artists who had work up for sale. Yet for all of its stimulation, London felt claustrophobic to him. Whenever Wilson could spare the time he wandered to the outer reaches of London, from Henley-on-Thames to Epping Forest or Stanmore Common, in search of a taste of peaceful countryside in which to walk and draw. For longer breaks, he still headed to The Crippetts. London, he wrote, particularly in the spring, left him feeling like a “soda-water bottle in an oven”. Additionally, Wilson must have felt family pressures intensely at this time, with one of his sisters marrying and another dying of Typhoid whilst nursing an epidemic in Leicester. 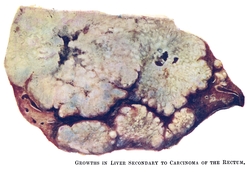 Wilson’s artistic abilities were soon noted at St. George’s. His tutors and peers delighted in his predilection for drawing portraits of them during lectures and this soon lead to requests for the use of his talents. In particular, his skills came into demand for pathological drawing, his accurate illustration of diseased organs being utilised by the hospital museum and to illustrate papers by several of his tutors. Dr. Rolleston asked him to illustrate his book on the Diseases of the Liver, which he happily agreed to, although this wasn’t finally published until 1905. Another colleague asked him to assist with some illustrations for his book on fishing flies.

One unexpected aspect to this was that he started being paid to execute pictures, sometimes as much as £1 for a drawing (about £70 in today’s money). This in turn allowed him to retrieve his belongings from the pawn-brokers. It wasn’t so much that he was unable to obtain money, his father would send him whatever he asked for, but he had started to experiment, quietly, with his strictly ascetic reading of the New Testament. For Wilson, principles had to be lived, not to remain mere ideals. He strove to instantiate Christian principles in his life and this involved, in part, living a frugal existence. He prided himself on living on as little money as possible and when he had it, he often simply gave it away. As a result, his watch, or other jewellery was often temporarily deposited with the pawn-broker. Perhaps this is why he never engaged in his desired evening classes at art school, or perhaps it was simply that he had too much to do. Already, his midwifery course required long hours in the slums and was depriving him of sleep. 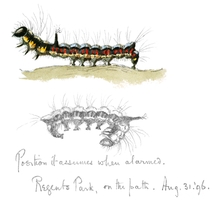 Wilson spent what time he could in painting and drawing or in studying the works of the great artists in the London galleries. He admired the work of Japanese water-colourists but thought little of Tissot or the artists of the Paris Salon. Most importantly, however, he became “smitten to distraction” by Turner and spent many hours studying his pictures. Turner was to become an enormous influence on Wilson’s artistic technique, just as Ruskin had become a huge influence on the way that Wilson thought about art. He increasingly sought to express these ideals in his pictures. Truth in painting, the ability to paint or draw whatever is seen as accurately as possible, became the benchmark of his success or failure. If he did not record something well enough, he tore up the result, no matter how aesthetically pleasing the picture might appear. So tightly was drawing or painting tied up with Truth for Wilson, that its execution became for him a form of prayer. As such, his dedication to improving his artistic skills, which he worked upon with great tenacity, became a part of his asceticism. These deeper motivations and principles on which he based his life, however, were hidden from all but his closest friends. To his colleagues he was his usual jovial self. 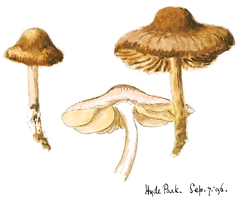 His long hours of work and his experiments with asceticism soon started to take their toll. In October 1896, he was sent for a week’s holiday to Cheltenham and The Crippetts, to recharge his batteries. Upon his return to London he moved his lodgings, taking up residence in the Caius Mission house in Battersea. Here he became engaged in youth clubs and Sunday school classes for the children of the Battersea slums. Occasionally, he took services, “talking, praying and singing in a positive reek of 250 Battersea children”. The children suffered from fleas, lice and numerous medical afflictions. He continued to walk the 3 miles each way, through Battersea Park and along the Thames to the hospital, every day. He enjoyed the walk, it gave him a break from the hospital and slums and he could watch the wildlife along the banks of the Thames. If he managed to get away from the din of the traffic, he noted, he could almost believe, just for a moment, that he was in the countryside. By now, he was ‘dressing for Dent’, whom he considered to be a first class surgeon, and was putting in long hours attending to accidents and emergencies, whilst preparing for exams. He became a member of the Guild of St. Barnabas in order to further explore the inter-relationship between his faith and his practice of medicine. Learning to love and truly care for some of his more demanding and self-pitying patients was proving something of a challenge to him. Wilson was also starting to seriously consider the idea of becoming a missionary in Africa. He believed that his skills for mission work, doctoring and natural history sketching might usefully be given “free elbow room” in a life there, whereas he had his doubts about being in a position to combine all of his interests in a career in England. This thought was not well received by his parents and he was eventually persuaded to postpone taking any immediate action upon the matter.

Wilson managed to take a short break to Brittany with his friend, Charles, exploring the area around Rouen but he generally preferred to go to The Crippetts for longer breaks. He turned down the opportunity to go to Paris as the captain of the hospital football team; he thought that the £5 could be better spent, although he was flattered to be asked. Given his love of art, this may seem surprising but perhaps the proposed trip would have left him no time for artistic study. For a short break from the life of the Mission he “got very fond” of the roof of the Mission house and would often sit up there to sketch the views over London. It was at the Mission house, one afternoon, that he first met Miss Oriana Souper. She was a friend of the Warden’s wife. After tea, Wilson excused himself to go and run his boys’ classes and then retired to his rooms to work. Later, he stole down the stairs to quietly listen to Miss Souper sing. Their friendship was to develop slowly but surely; Wilson at this stage in his life remaining a sworn bachelor.

Wilson’s appetite for art continued apace. He thoroughly appreciated Swan’s chalk studies of animals, exhibited at the Zoo and the exhibitions of the Royal Institute of Painters in Water-colours. Here he admired work by Yeend King, Parsons and Richardson, among many others. He also went to see an exhibition of Millais’ drawings but had trouble in fighting his way through a sea of ladies brightly coloured hats; a “Reckitt’s blue dress and hat on one person will take the distance out of any picture” he dryly noted. However, it was his study of Turner’s sketches that still most occupied his artistic life. Nevertheless, his method of self-teaching appears to have increasingly paid off, Wilson becoming more proficient in the use of water-colour as a medium during his London years. Increasingly, water-colour drawing became his preferred media. He nevertheless continued to execute some very fine pencil studies.

When Wilson returned to Cheltenham for the Christmas of 1897, his parents thought that he was looking frail and worn. On New Years Day, 1898, he started to read a biography of St. Francis of Assisi who rapidly became a role model for him. He was soon back at his hospital duties in London and also took on most of the work of the Mission, due to the illness of the warden. Given the intensity of his life in London, it seems little wonder that his health began to waver. By February of 1898 he was suffering a high fever, pains and giddiness, but he continued to work. After 3 weeks, he went and consulted with Dr. Rolleston. After various tests, Dr. Rolleston confirmed that he had demonstrated the bacilli; Wilson had contracted Pulmonary Tuberculosis. He was advised to seek treatment at Davos at once. It was a considerable shock both to Wilson and to his family, Tuberculosis frequently being fatal.