Edward Adrian Wilson was born on 23 July 1872 at Montpellier Terrace, Cheltenham. He was the second son and fifth child of E

On his mother’s side, the Whishaw family constituted a long line of successful lawyers and businessmen stretching back to the 16th century. In particular, they traded between Russia and the United Kingdom. Yet the family also appears to have fostered a certain amount of artistic talent having produced several artists over the years. A contemporary cousin of Wilson’s was the noted artist William Frederick Yeames R.A. (1835-1918).

On his father’s side, the Wilson family were wealthy Quaker industrialists. Wilson’s great-grandfather, Edward Wilson of Liverpool and Philadelphia (1772-1843), left his children inherited fortunes; they wrote ‘gentleman’ as their occupation and in the early 19th Century fashion became dedicated collectors. Two, in particular, developed large collections of Natural History books and specimens, Wilson’s grandfather, Edward Wilson of Hean Castle (1808-1888) and Thomas Bellerby Wilson of Philadelphia (1807-1865). Between them, these two brothers provided a significant part of the endowments that founded the Philadelphia Academy of Natural Sciences. Among the many books and specimens they presented to the Academy were 28,000 ornithological specimens, including Gould’s collection of Australian birds and the Rivoli collection of the Princes of Massena. A series of bad investments meant that neither Wilson’s father, nor his brothers, inherited fortunes but were merely comfortable. It is said that Edward Wilson of Hean Castle called his sons into a room and sadly informed them that they would have to work for a living. Whilst his brothers travelled the world with the army and Church societies, Edward Thomas Wilson settled as a physician in Cheltenham. He had nevertheless inherited his father’s passionate interest in the Natural Sciences. As a fellow of the Royal College of Physicians, he pioneered the development of isolation fever hospitals, district nurses and a clean drinking water supply for Cheltenham. He helped to found the Delancey hospital, the local Municipal Museum and the Cheltenham Camera Club. He was also President of the Cheltenham Natural Science Society, publishing numerous scientific papers. He also appears to have inherited, though not much to have pursued, a basic competence in water-colour painting from his mother, Frances Stokes (d.1891).

Wilson’s childhood was full of news from his Wilson and Whishaw relatives, from the far flung corners of Imperial Russia, the British Empire and beyond. Uncle Charlie (Major General Sir Charles Wilson 1836-1905) was a particularly good source of stories: he served with the Royal Engineers and was sent to relieve Gordon at Khartoum.

From the age of three his parents noted that Wilson liked nothing better than to lie on the floor drawing. This resulted in his mother giving him drawing lessons. From the age of five onwards it is clear that the results were thought to be of interest, as they were collected into scrapbooks. These early childhood drawings are filled with an impish delight and imaginative flair, for his parents noted that at this age, he disliked copying anything from books. The vast majority of the early drawings, however, are either examples of his home-made Christmas cards or soldiers.

Whilst his parents were delighted with his drawings, there is no doubt that Wilson possessed an artistic temperament to match his artistic talent. His moods were many and varied but always intense and often explosive. “The least thing” was said to make him cry, for which on one occasion he was dressed in his sister’s clothes as punishment. These fits of earnestness were dosed with a mischievous sense of humour, just as his deep care for his family was laced with a strong sense of his own independence.

These moods also proved to be a challenge to his Governess, Miss Watson, from 1878, who found him “clever but boisterous” and so he was sent to a Preparatory School the following year. Although he was good at sports, even captaining the school 2nd XI, they never truly excited him, any more than his schoolwork. His reports were often full of the word “refuses” and he often had to forfeit his shorter school holidays as punishment, to catch up on his work. His father thought that he was “in his element” when fighting with boys from a rival school. At home the family often took long country walks and with his father as his guide, the Gloucestershire countryside became Wilson’s first love and inspiration. By the age of nine he had announced that he was going to become a naturalist and his mother noted that he would far rather have a naturalists walk with his father than play the games of the playground. Wilson started to develop his own natural history collections, collecting “everything he can lay his hands on”. In particular, he and his father started to develop an impressive collection of birds eggs. From September 1879 these natural history enterprises became simpler when his mother took on a farm, Sunnymede, near Up Hatherley on the outskirts of Cheltenham. She was a notable breeder of poultry and the farm also produced quantities of fruit and vegetables for the ever expanding Wilson family, which eventually numbered ten children. 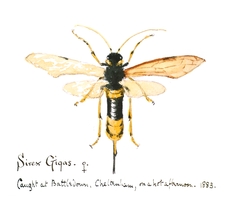 Much to his parents relief, his tantrums seemed to vanish when Wilson hit double figures. Yet the intense emotions expressed in his childhood never really left him, he simply learned to hide them. The expression of his wild passions and keen sensitivity became increasingly sublimated into art. His first surviving landscapes, of Kidwelly in Wales, were drawn at the age of ten, in 1882, whilst among his last soldier pictures are those depicting the battle of Tel El Kebir (1882) where the British took Cairo from the Egyptians, and from where Uncle Charlie was sending letters home. After this date the focus of his interest begins to change to almost exclusively natural history subjects. His interest in blood and gore being channelled more effectively, perhaps, by “White the bird stuffer” who gave him his first lessons in taxidermy at the age of 11. He started to become more interested in his school work at this time, too. So much so, that he was sent as a boarder to another Preparatory School run by Mr Wilkinson, at Clifton in Bristol, as it was thought that he might be able to achieve entrance to a public school. The school set high academic and moral standards for its pupils and also tacitly encouraged the boys interests in natural history by turning a blind eye to a veritable menagerie in the schoolroom. Wilson was in his element. In between lessons the boys went birds-nesting and Wilson showed unusual sensitivity to natural history collecting for the period, never allowing all the eggs to be taken from a nest in ‘mere robbery’ but only taking one egg in four. His collections of beetles and other insects also became increasingly scientific, being correctly sorted and labelled. 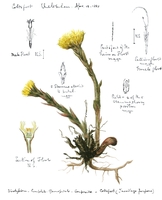 Wilson failed to get a Public School scholarship, so it was decided to send him as a day pupil to the Cheltenham Proprietary College for Boys. His academic work here was solid but never extraordinary. However, he excelled at games, at art and in the activities of the Natural History Society, being secretary of the ornithological section for some time. It was whilst at Cheltenham College that he received the only systematic art lessons of his life, as part of the school curriculum. His notebooks filled with classical drawings, still life studies and pictures copied from books to refine technique. At this time too, his natural history observer’s notes started to become more complex and he started to gather his natural history drawings into separate volumes, with accompanying notes. This was undoubtedly influenced by the fact that at the same time that he started at Cheltenham College, his mother ended her lease on Sunnymede, taking on a larger farm near to Cheltenham The Crippetts, near Shurdington. The fact that he was a day pupil allowed him to wander freely before and after school in its fields and hedgerows, making observations of the natural world, its wildlife and the changing seasons. He would often wrap himself in a cloak and leave the house before dawn to be in position in the woods before sunrise or take his supper up to The Crippetts to observe rabbits playing in the long summer evenings. Through his teenage years he taught himself to become a quite remarkable field naturalist. It is said that he not only learned to recognise the calls of the birds but could state exactly what the bird was doing when it made such a call.

Undoubtedly, his father had a huge influence on Wilson’s progress. He set out to teach his son the importance of observing from Nature itself, to see what is present and to accurately record it, rather than seeing what is desired. During the summer holidays from 1886 to 1889 Wilson carried out a remarkable set of botanical studies, under instruction from his father. The first images were in pencil, but other series were in pen and ink and eventually he graduated to water-colour, though pencil remained his preferred medium at this time. By 1888 he was executing quite passable botanical, architectural and landscape drawings. His water-colours were still largely experimental, however, as his first surviving water-colours of more complex ornithological subjects, a Moorhen and a Hawfinch, dated 1890, clearly show.

It seems surprising, perhaps, given such an obvious talent and his enthusiasm for pursuing it, that a decision wasn’t taken to foster it in some way. However, in the Oxford and Cambridge exams Wilson obtained his certificate with honours in science. It was decided that he would enter Gonville and Caius College in Cambridge to pursue a career in medicine, like his father. Natural History and art were clearly seen as subjects for hobbies and not a career. In some ways Wilson struggled with this belief for the rest of his life.