The British National Antarctic Expedition was part of a co-ordinated pan-European campaign to unveil the frigid enigmas of Antarctica. Explorers had ventured South before but surprisingly little was known; it wasn’t even clear whether a continent existed in the hole on the map. Wilson was caught up in a whirl of preparations for heading into the unknown aboard the purpose built ship Discovery, under Commander Scott. He brushed up his skills in taxidermy, on the identification of whales and dolphins and read up on subjects such as scurvy. He also designed the Expedition crest for use on crockery and note-paper. Much of Wilson’s time was spent in the Natural History Museum working on the specimens from the recently returned Southern Cross expedition and he wrote the Expedition Report on the seals. Wilson’s first paper on Antarctic fauna was therefore published before he had ever been South and the illustrations, whilst competent, clearly reflect this.

They represent the very style of ‘wooden’ wildlife art from dead specimens that Wilson so wanted to move away from. In this case, however, he had little choice. Upon return, his artwork for the seals in the Discovery Expedition reports would be intimate portraits of live animals.

Discovery sailed from the Solent on 6 August 1901 after an inspection by the King and Queen. Wilson watched his wife slowly disappear from view. As they sailed South, he soon found himself to be in his element, working with the other scientists to uncover the mysteries of the ocean. He commenced the large biological collections of the Expedition, collecting and painting seabirds. These became his first serious ornithological watercolours. In addition to painting the specimens which were destined for British Museums, Wilson also enjoyed sitting and sketching birds from the ship in all weathers. He was later to become noted for his artistic achievement in successfully capturing the flight of seabirds on paper, in a period when most artists were still painting seabirds as stuffed specimens. Wilson, the amateur dabbler, was by this time inadvertently working at the forefront of modern wildlife painting and seabird ornithology. This isn’t to say that there weren’t difficulties; he had to work out how to keep his paper dry and to produce an accurate sketch of a seabird whilst the ship was swinging through 30°.

There were challenges in other ways too. Wilson found that it took him a considerable effort to adjust to the Navy way of doing things, despite his admiration for several of the officers, including Scott. His most withering criticism, as always, was reserved for those with large egos who didn’t pull their weight. He still occasionally let slip a caustic remark and so became known as ‘Bill the cynic’ to some aboard. However, he viewed his confinement with such men as a part of his ascetic progress: it challenged him to maintain self-control. He gradually earned the respect of his shipmates both for the application of his numerous skills and his diplomacy. As at school and Cambridge, many of his shipmates turned to him as a trusted confidante.

Sailing via Madeira, South Trinidad, South Africa and Macquarie Island, Discovery finally sailed from New Zealand on 24 December and headed for the Ross Sea. Just after midnight on 8 January 1902 they sighted the coast of Victoria Land. From here Wilson started on a series of panoramic sketches, producing a unique cartographic record of the coastline of Victoria Land from Cape Adare to Ross Island. He also produced numerous sketches of the Great Ice Barrier and the newly discovered King Edward VII Land.

Eventually securing their winter quarters at Ross Island, Discovery settled in for the winter. Wilson was busy assisting with the wider scientific programmes as well as his own vertebrate zoology work and medical duties. He walked to the top of Crater Hill with Shackleton almost daily to read the temperatures at the outlying meteorological station. It was during such walks that he sketched, under extremely difficult conditions, some of the phenomena of an Antarctic winter. Able to work in pencil for only a few minutes at a time, he would then warm his hands in his armpits until the pain of their re-warming had passed, then continue to sketch. 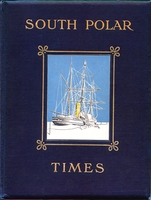 Back at the ship he worked up these sketches into finished pencil drawings and later into water-colours. In this way he secured some extra-ordinary images, including the first accurate images of the Aurora Australis. Wilson’s colour memorisation technique came into its own in the Antarctic. His colleagues marvelled at the accuracy of his work and the sheer quantity of images that he was able to produce. In addition to his more serious art-work, he also substantially illustrated the ship-board magazine, The South Polar Times.

It was during the winter that Scott asked Wilson if he would accompany him on the great exploration Southward the following season. The journey did not have the Pole as its objective but was an exploration to the South to see what was there, although, of course, no-one would have complained if the Pole fell into their laps. Everyone aboard hoped for the chance. Wilson was astonished to be asked and not entirely happy to be taken away from his biological work; yet he was quietly pleased to be given such an honour. He persuaded Scott to take one other person and Scott chose Ernest Shackleton. Once a Spring scurvy outbreak aboard delayed their departure, however, they knew, even before they left the ship, that there was no chance of the Pole. Wilson obtained some notes on scurvy and started to ponder its true cause.

Instead of finding a flat icy plain all the way to the South, the Southern party came across magnificent new coastline and mountain ranges. The optimism of the first part of their journey was soon tempered by the rapid failure of the sled-dogs and the need to relay their supplies. Wilson dissected one casualty to find that it had died from a form of dysentery. After 60 days of sledging, the men commenced symptoms of scurvy and the dogs were nearly done. It was time to head home. They had achieved a farthest South of 82°. Scott named the inlet at their farthest South for Shackleton and the Cape for Wilson. With the dogs nearly all dead they man-hauled their sledge home. Shackleton was deteriorating rapidly, coughing blood and suffering fainting spells. Scott and Wilson, themselves suffering, struggled to get the party home. It was a close call but they made it. A large dinner was held to celebrate their arrival but the stomachs of the three hungry men were so shrunken that they spent all night alternately eating and throwing up. Wilson noted that he only had a bath after 3 months sledging out of a sense of duty to his shipmates, such was the pain involved in bathing his bruised and sunburned body. Shackleton’s health was deemed to be unreliable and he was evacuated home aboard the relief ship, Morning.

As soon as he was able, Wilson worked up the many dozens of sketches from their Southern journey and caught up on his zoological work. 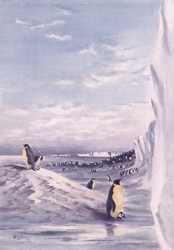 Topographical pictures, water-colours of parhelia, mock suns, fog bows and other astonishing visual phenomena of Antarctic sledging, started to emerge from Wilson’s cabin. It was in the execution of these that Wilson’s study of Turner started to truly come into its own. His application of the technique of halation was used to great effect in recording the boundaries between ice and light. Wilson passed much of the second winter in executing such pictures. Discovery‘s second year in the South was an unexpected bonus. The unrelenting ice had obliged them to remain through not releasing the ship during the summer months. However, it gave Scott the unique opportunity to assess the results of the first year’s geographical and scientific work and to plan for a second season to fill in gaps. To Wilson, it gave the chance of being the first to study the breeding biology of the Emperor Penguin.

The biology of the Emperor Penguin was, at this time, completely unknown. Therefore it was a cause of considerable excitement when a party, under Lieut. Skelton, found the first breeding rookery of Emperor Penguins at Cape Crozier. Wilson had been frustrated not to have had the opportunity to study these but the unexpected second season allowed him to do just this. He left for Cape Crozier as early in the Spring as he dared, in order to secure good specimens of Emperor Penguin eggs. Instead, to his astonishment, he found quite well grown chicks and was led to conclude that these remarkable birds had to lay their eggs in the middle of the Antarctic winter. It was one of a series of remarkable field observations that Wilson made of these birds over the following months. 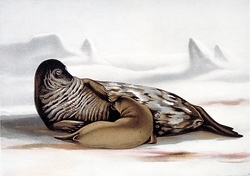 To everyone’s delight, towards the end of the second summer, the ice finally freed Discovery. The Admiralty had sent two relief vessels to evacuate Discovery in the event of the ice trapping them again but no-one had wanted to abandon the ship. The Expedition returned in triumph to New Zealand and civilisation and there Wilson found his wife waiting for him. The scientific and geographical discoveries of the Expedition were considerable. Additionally, what was to be the last of the great naval expeditions of exploration in the Victorian style had achieved an astonishing visual record of Antarctica, in no small part due to Wilson’s work aboard.