The intake of freshmen to Gonville and Caius College in 1891 quickly developed a reputation for being turbulent. Wilson was often in the thick of the action and yet somehow managed not to allow it to deprave him, preferring to draw witty caricatures instead. It was Wilson’s sense of humour which won him so many friends, as did his generosity with his knowledge and possessions. Wilson also quickly developed a reputation amongst his tutors and peers as a mediator and peacemaker, a role which was to follow him for the rest of his life: his fellows trusted his moral judgement and his personal integrity. The rooms which he occupied from 1892, high up over the Gate of Virtue, became a centre of college life, the Master finding it necessary to comment upon the frequency with which his nickname, ‘Ginger’, was heard to ring around the courtyard as it was bellowed up at his windows. Despite such constant interruptions, Wilson knuckled down to his studies, the several hours that he devoted to study every day soon paying off as he was awarded the status of an Exhibitioner, a small compensation for not obtaining a scholarship. Wilson also rowed for his College, scoring several pewters. Rowing was a physical discipline that he particularly enjoyed, he felt that the treadmill of training was good for him and he enjoyed the thrill of the race.

Despite his popularity, in many ways Wilson cut an isolated figure. Underneath the jovial veneer, he was still a sensitive and highly strung young man. He was critical of both himself and others. He disliked hypocrisy, injustice and self-pity, no doubt struggling with these traits within himself, and he possessed a caustic tongue that could be cruel. Wilson constantly struggled to achieve mastery over himself and these faults, possessing enough humour, humility, self-depreciation and lack of confidence to avoid ever becoming pious. This deep introspection, typical, perhaps, of an undergraduate, appears to have led to a series of brooding self-portraits, something that he rarely indulged in, either before or after this time. It was during this time, too, that Wilson began to formulate the deep Christian code by which he lived his life. This was based upon a stringently ascetic reading of the New Testament. None but his intimate friends ever realised that it was this deeper spiritual level that gave Wilson the moral power they so respected, as he rarely talked of such things, yet it gave him the inner strength and ascetic self-discipline upon which his future life would depend. Wilson came to care little for originality and greatly for Truth, whether scientific, moral, artistic, spiritual or physical. Every aspect of life became, for him, a part of an indivisible Divine Truth with science, art and poetry simply different ways of explaining and experiencing a complex but Divine creation.

In between studying and rowing, Wilson and some of his friends started “intellectual Sunday evenings”, at which they would study and discuss art, music and poetry whilst smoking and drinking coffee. He particularly fell in love with Tennyson. Wilson became active in the Caius Mission and in several College societies, occasionally reading papers on varied subjects. He also found time to continue with his natural history studies. He took the opportunity of long holidays to spend time at The Crippetts and to continue his long term observations of the countryside there. It is doubtful whether anywhere else ever quite filled the same place in his affections as the woods and hedgerows of the Cotswold countryside. When back at Cambridge, he continued his habit of long country walks, collecting and painting items of interest. His friends often enjoyed accompanying him and were astonished at the breadth of his knowledge of the natural world. On one occasion, for which he was much ribbed, he tried to jump a dyke and fell into it backwards, having to walk back into College positively dripping. His contemporaries commented that his rooms looked like a Museum they were so full of interesting skulls, bones, feathers, plants and other specimens. The walls and floors were littered with pencil and chalk drawings, which were his preferred media at this time. Nevertheless, he drew in pen and ink and was increasingly experimenting with watercolour. He amused visitors to his rooms by producing their portraits in water-colour, pencil or silhouette. On shorter vacations he would often go to London and spend time at the Zoo, the Natural History Museum or the National Gallery. It was here that he started to become better acquainted with the great art masters.

During the summer vacation of 1892 Wilson and a friend matriculated at the University of Göttingen. His journey to and from Germany provided him with the opportunity to devour the art and architecture of Rotterdam, Antwerp, Brussels, Cologne and Cassel. He filled some 23 pages with notes, many on the great masters, particularly Rubens and Van Dyke and he commented, with surprise, that De Grayer and Sals were not better known. Whilst at Göttingen, he was astonished by the ritual duels of student life in the Landwehr Corps, such pastimes having long since been banned in England. In between his language studies, Wilson most enjoyed exploring the countryside. On one of these many excursions he found a tree with a Red Kite’s nest, to which he climbed and collected a chick. This became a lively pet, which he christened ‘Milan’, and it caused a certain amount of chaos back in Cheltenham. The kite eventually found its way to the London Zoo where it lived for many years. Upon his return to England, Wilson found that his enthusiasm for the art collections at Windsor and the National Gallery were considerably enhanced by his travels; indeed he said that he had never enjoyed the National Gallery as much. His visit to Europe also inspired his interest in things around him in Cambridge. He cooked up a scheme with a friend to visit ‘all the sights of Cambridge’ and spent a good deal of time studying and discussing local architecture and art. His developing enthusiasm for such things took him further afield to visit many of the great Cathedrals. A trip to visit his brother in Yorkshire and join a shooting party became a chance to visit the Cathedrals at Durham and York. This appetite for art also took him back to Europe with a reading party to Blankenberge in Belgium, which enabled him to make a return visit to Antwerp and to visit Bruges. 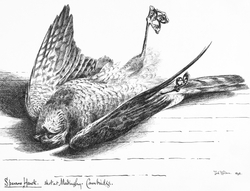 In 1894 Wilson sat his exams, taking his degree with a first class pass in the Natural Science Tripos (part I). He was, quite naturally, utterly delighted and chose 5 volumes of Ruskin as a prize: his reading of Ruskin was becoming increasingly influential upon his own views on art. Wilson was expecting to go straight on to St. George’s Hospital to work towards becoming an FRCS and was astonished when the Master of Caius asked his parents if he might be permitted to stay on at Cambridge for another year because he was considered to be such a good influence on the College. Wilson was not in favour and wrote to his father to say so: the work that he would need to put in to the extra exams (The Natural Science Tripos part II) did not, he said, sufficiently interest him. Neither was Wilson convinced that staying up would help his medical career and so he generally preferred to get on with his ‘real work’ at the Hospital. Nevertheless, he was persuaded to stay on at Cambridge for an extra year. Perhaps this was due in part to the sudden death of his youngest sister, Gwladys and Wilson not wishing to add further to his parents concerns.

Wilson continued to pursue his love for art and the natural world throughout his remaining time at Cambridge. He increasingly indulged his passion for walking in the fens, sketching the wildlife and making notes. His reading became pre-occupied with biographies of the great artists in addition to his medical books. A consequence of this was the life-changing realisation that even the greatest artists had had to study and learn their artistic technique. This realisation was liberating for Wilson and began what his father suggested was a ‘craze’ for drawing and art. He started to work and to re-work his pictures, training himself in artistic techniques by seeing and criticising the work of others and accepting the critique of his family and friends. A new desire, however, was for art lessons that would train him to be a ‘proper’ artist and he harboured plans to take evening classes at an art school during his hospital training in London. As a result his notebooks, from 1895, begin to fill with images as he dedicated more time to natural history painting. In this respect his extra year at Cambridge was an unmitigated success. It was, however, an academic failure, as he failed his further exams. However, Wilson doesn’t seem to have been more than mildly irritated that he was put up for them in the first place. No doubt his extra year to indulge in art and poetry had been adequate compensation. He also carried off the University prize for diving. Many of the friendships he made with masters and fellow students during his Cambridge years lasted for the rest of his life.

Upon leaving Cambridge, Wilson joined his family for their holiday at Nevin in Wales; many Wilson family holidays were spent in Wales and had been since his childhood. His father noted that Wilson’s sketching skills had significantly improved over the last year: his extra application in this regard was clearly paying off. The rest of the summer was, as usual, spent at The Crippetts, sketching, walking and shooting. Wilson, however, was looking forward to getting on with his work at St. George’s Hospital and to the possibility of art classes.