Wilson’s work as the Field Observer to the Grouse Disease Commission soon started in earnest. By early 1906 there were dead grouse “pouring in by every post” to the Wilson home at Bushey. Every dead grouse found on a British moor was dispatched to Wilson for examination and a good many were suffering from delays in transit. Over the course of the Inquiry he would dissect just under 2,000 birds, leading one of his colleagues to comment that in whatever location Wilson was situated he was constantly surrounded “by a halo of grouse feathers and unravelled entrails”. This was not terribly popular in station hotels. As he travelled around the country in pursuit of his work, odious remains were occasionally forgotten. The vast majority of the grouse sent to him he turned into museum skins, as well as taking detailed biological notes. Every bird then had a report filed upon it. Upon filing one such report on a brace of grouse recently received through the post, Wilson received the astonished reply that they had been intended for him to eat, not to dissect. In all of this work Wilson received the competent support of his wife, Oriana, who was, to all intents and purposes, his unpaid assistant. 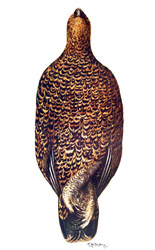 The Inquiry was very complex and fraught with politics. Every landowner, sportsman and ghillie were convinced of their own expertise regarding the true cause of the epidemics. Additionally, there had been two predecessors to Wilson in the post of Field Observer, including the respected scientist, Professor Klein; both had put forward theories on the disease. Added to this potent cocktail was the fact that Wilson no longer believed in blood sports. Although he had hunted in his youth and was a good shot, Wilson had ceased to believe that blood sports had any place in a civilised society. Likewise, he had long since given up his egg collecting activities except for strictly scientific purposes and now preferred to simply draw or paint live birds and their nests. These were unusual views in the Edwardian era and Wilson rather wisely chose to rarely express his views on blood sport in his current undertaking. However, he was less hesitant to give his opinion on the treatment of ‘vermin’ on the grouse moors or on the likely or unlikely causes of grouse disease. Many a ghillie took affront to these views until they started to realise that Wilson knew as much, or more, of the habits of grouse and their predators as they did. Such conversations were often held whilst strolling over the grouse moors where Wilson often outpaced these professional keepers, much to their surprise. One way or another, Wilson slowly won them around and whilst they might not end up agreeing with him he earned their respect. This was critical to the success of the Inquiry, over the course of which Wilson visited most of the major grouse moors of Scotland and many in northern England.

In July 1906 the Wilsons moved up to Scotland to be nearer to the grouse work. Lord Lovat put his shooting lodge at Glendoe at their disposal and they frequently stayed here during the Inquiry. Wilson rapidly made friends with the monks of the nearby monastery of St. Benedict and with many of the other local landowners.

He executed landscapes whenever he was able, although the Scottish landscapes are few in number as he was so busy with other work. Nevertheless, he continued the process of his artistic self-tuition, experimenting with a different water-colour technique whilst in Scotland. Wilson generally utilised a technique of painting on damp, thin paper which allows for delicate colour blending but has to be carried out quickly. He started to experiment with the use of a dry, rough paper; however, he soon abandoned this in favour of his old method.

Despite the fact that grouse were continuing to arrive in the post, none had yet arrived with the dreaded disease. In fact it took 3 years before an outbreak of the disease occurred again. Wilson’s suspicion as to the cause of grouse disease had started to fall upon a minute threadworm which he had found infecting the cœca of weaker birds and appeared to interrupt the digestive process, so killing the bird. It was of considerable delight to Wilson, therefore, to discover the worm alive and wriggling in a diseased grouse lung, to watch them hatching and burrowing in the gut and to find dead worms in the liver. He was getting close to being able to prove that the threadworm was indeed the cause of the grouse disease. Wilson rapidly traced the mode of infection to the dew drops on the tips of the young shoots upon which the grouse feed. 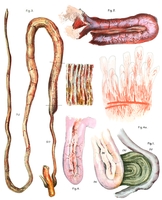 It took him many early mornings of study upon the moors to gather the evidence for this but he revelled in it. Wilson was rarely indoors except when examining grouse or working with his co-workers upon the microscopic examination of organisms. They were searching for the secondary host, in order to give a complete account of the life of the threadworm and the course of the epidemic disease. However, the secondary host proved somewhat elusive. One hotel even had a bag of suspect slugs left behind in it when Wilson rushed for a train. He dreaded to think what the chambermaid thought.

The Grouse Disease Inquiry was taking ever increasing amounts of Wilson’s time and far more than the six months per year that he had been led to expect. He often had to travel from one end of the country to the other for meetings or to visit grouse moors, the owners of which often entertained him so well that it “cuts into my work”. He often spent his train journeys catching up on proof corrections or correspondence. He had no time for reading and so, often as not, Oriana would read out loud to him whilst he was dissecting grouse. With the expansion of the grouse work Wilson was seriously over-committed and as a result became severely over-worked. Yet he dealt with the many demands upon him with a typically calm assiduousness, doing each and every thing in front of him without fuss and to the best of his ability. He was determined to explain the cause of the grouse disease and equally determined that each and every plate for the mammals and the birds should be a unique composition based, wherever possible, on his personal observation.

In February 1907 an unexpected letter arrived from Shackleton informing Wilson that he was heading back to the Antarctic with his own expedition and with the objective of reaching the South Pole. He wanted Wilson to be his second in command. Wilson declined, due to the fact that he was already over-committed and really did not feel that he could leave the grouse work. Wilson also wrote to Lord Lovat re-affirming his commitment to seeing the work through. Shackleton failed in his attempts to extricate Wilson from the Inquiry. These letters were followed several weeks later by letters from Scott, who was upset that Shackleton had announced that he was going to use his old base without consulting him. Scott was also brewing plans for another expedition. Both men turned to Wilson to mediate in their dispute and a deal was brokered. Shackleton eventually failed to keep it and when he returned to the United Kingdom in 1909 as a hero, Wilson nevertheless broke off their friendship.

An additional shock occurred when Wilson had his suitcase stolen at Glasgow station. It contained all the results of his grouse work to date. Wilson was deeply upset but set about salvaging what he could from his original rough notes. It was a huge amount of additional work that Wilson could have done without. At this time the Inquiry was studying the effectiveness of rotational burning of the moors to control the spread of bracken and perhaps of the threadworm. 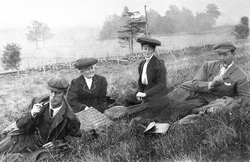 In September 1907, the Wilsons finally managed to have a few days of rest. They were invited to ‘Burnside’, the shooting-bungalow of their friends the Reginald Smiths at Cortachy, Kirriemuir. Captain Scott was staying too and, as Wilson had already agreed to head South with him once more, they started to formulate plans for the next Antarctic expedition. The Wilsons stayed at Cortachy again for much of the following summer. They had also taken a house in Cambridge where during the months that he wasn’t on the moors, Wilson was carrying out laboratory work on the grouse disease. He carried out experiments on living grouse, infecting them with the threadworm in order to prove the cause of the disease. For this he required a Vivisector’s License, much to the Wilson family’s amusement.

By mid-1909 Wilson had been publicly confirmed as the Chief of Scientific Staff for Scott’s forthcoming expedition. Expedition preparations started to be added to Wilson’s long list of work. He was also trying hard to finish the grouse work before heading South. Of the final Report of the Commission, Wilson wrote approximately one third and provided the majority of the illustrations. A paper promised to the Zoological Society on the changes of plumage in Red Grouse, was written on the train and finished in a station waiting-room. He was so tired that he took to working standing up, so that he didn’t fall asleep over his work. Wilson was still trying to finish the grouse work when he sailed South in June 1910. The final instalments were posted home to the Commission from South Africa in August. The grouse work was completed at last. 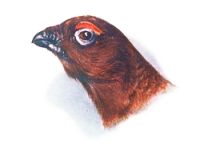 Wilson, was destined never to see the results of his work in the final Report of the Commission. However, The Grouse Disease Inquiry was the first major study to investigate fluctuations in numbers of a wild bird species and pioneered many of the methods of modern field ornithology. It also stood for almost a century as the most extensive scientific investigation carried out into a disease in a wild bird population. For his part in it Wilson was later recognised as being amongst the world’s leading ornithological pioneers for the first part of the Twentieth Century.