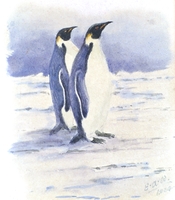 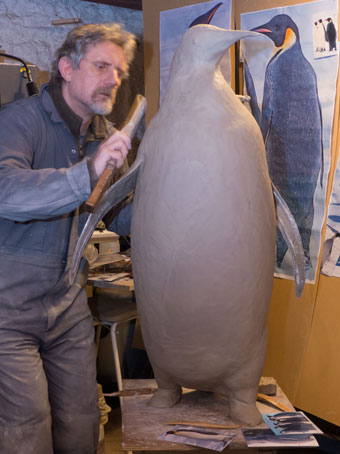 Nick said, “I have had a fascination with penguins, and particularly emperor penguins, since early childhood. I remember seeing images of these amazing birds, huddled together in Antarctic blizzards at temperatures of -60 degrees C or even colder – how could I not be captivated?!

I have long known of Edward A Wilson. The Antarctic adventures of Scott, Shackleton, Wilson, et al, and the ill-fated attempt on the South Pole by Scott, Wilson, Oates, Bowers and Evans are tales of heroism to stir any young boy’s heart.

The challenge of sculpting a life-size emperor penguin was exciting enough (I have always wished for the opportunity to sculpt one) but I also wanted to imbue the finished bronze sculpture with life and character, and a sense of that indomitable spirit, both of emperor penguins themselves and of those who went in search of them in those early days of Antarctic exploration.”

Julie Finch, CEO of The Cheltenham Trust, which manages The Wilson, said, “The arrival of the emperor penguin statue  is something the whole team at The Wilson has been looking forward to for a while. It’ll be wonderful to see visitors interacting with the work, and learning more about Cheltenham and the Wilson family.”

To celebrate the arrival of the penguin, The Wilson will be organising a range of themed adult and family orientated activities, including themed Tots & Tales and Arty Sunday sessions, and special museum trails about the history of Dr. Edward Adrian Wilson in the Antarctic, exploration and natural history.

The penguin is expected to be on display in the foyer of The Wilson from late October 2015. The Wilson is open from 9.30am to 5.15pm every day and entry is free. Details of other exhibitions, displays and events can be found at cheltenhammuseum.org.uk